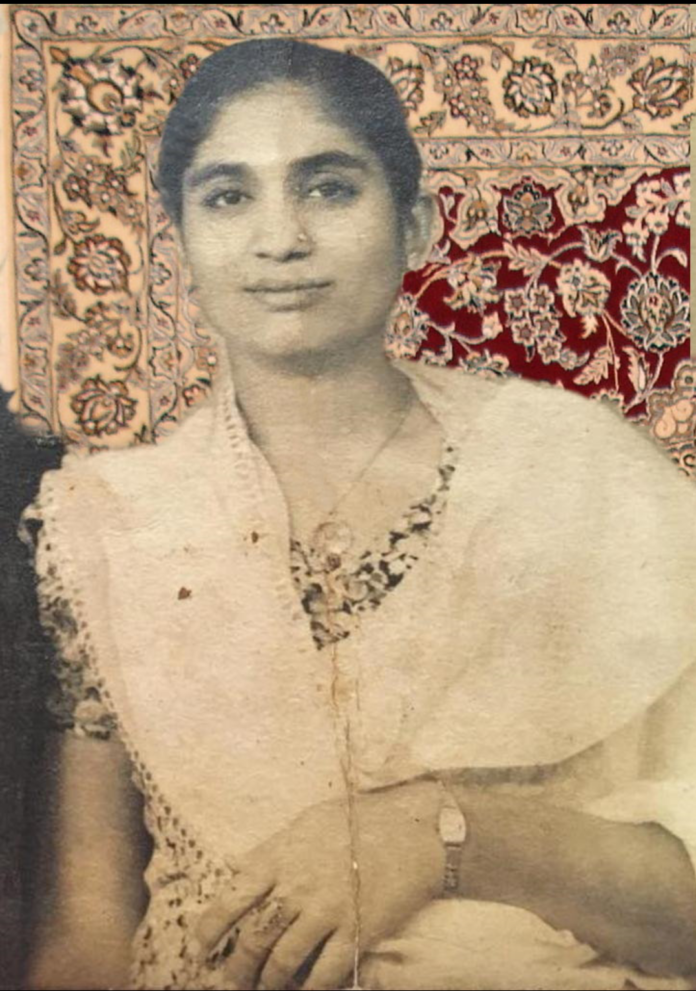 All lives should be celebrated. Most leave footprints in the sand, only to be washed away by the changing tides of time. Some, on the other hand, leave large indelible prints; paths that future generations emulate and follow.

This is a story about Devibai Mehta, a nurturing mother, a doting grandmother, a courageous woman, a pioneer, a stalwart, and a lifelong inspiration to her children and grandchildren. By sharing her story, we hope she leaves a lasting impact on future generations of the Bhagnari Community, as she has with her family.

Devibai Gehi was the daughter of Shri Ghanshamdas Gehi, featured in the May 28th 2020 story. During her teens, she was married to Jethanand Mehta, who belonged to a wealthy Raisahib family in Karachi. Together they had 4 children – Sunder, Ram, Pushpa, Kishore. It was meant to be a well-scripted, perfect life.

But then life happens while you are busy making other plans. As things turned out, she found herself fleeing Karachi with her 4 children during partition. She landed in Bombay at the age of 28, only to realize that her husband had no intention of joining them. She found herself in a circumstance nobody wants to be in – poor, penniless, unemployable, and with a responsibility to care for four young lives all by herself. She was a single mom before the term “single mom” was ever invented. Devibai then proceeded to do what she does best; actions that exemplified the rest of her life.

Her first priority was to earn a living. She had barely finished grade 4 schooling, enough to make her fluent in Gurmukhi. She was adept at embroidery and stitching. So, she started soliciting orders from the community, and stitching clothes/accessories with her sewing machine. Little by little, she started to earn enough to feed and educate her children. People still comment on her amazing seamstress skills. Her sewing machine was a permanent fixture in her bedroom till she died.

Her next priority was education. She was determined that her children continue schooling in India. Sunder was admitted to the Sind Model High School, and Ram & Kishore went to St. Michael’s High School. Sunder, being the eldest, made significant sacrifices by working during his teenage years to earn an income to support the family. He was one of the first Bhagnaris to seek employment in Dubai in the 1960s. He was affectionately known as Maama by all those who followed him in Dubai (we will write more about him in a subsequent article). His sacrifices allowed Kishore and Ram to earn their Engineering degrees, and subsequently study in the UK.

Her emphasis on education has permeated to her grandchildren and great grandchildren – several have Master’s degrees, were educated abroad and live/work in India, UAE, UK, US and Canada. None of this would have been possible if Devibai had not made education a key priority in the midst of what was a hopeless situation. Although she never earned a formal education herself, she was wise beyond words, knowing that her family’s best path out of poverty was a good education. To this day, when future generations of Mehtas get together, they reflect Devibai’s values. They talk incessantly about the value of education above everything else, and share stories about their children’s academic pursuits.

Devibai had several other amazing human qualities that made her a pioneer – one of the female leaders in the Bhagnari Community. She was affectionately known as “Jhansi Ki Rani” by her father. She was a Warrior, the Can and Will Do Lady, Our Iron Lady.

Every morning she would read the Sukhmani. It was her time to renew her faith, to regain her will and mental composure, in the midst of a life filled with constant turmoil. It kept her grounded and resolute, always believing that no matter how bad things were, they could always get better. At her core, she was an optimist, and very little fazed her. Later in life when her family would go through challenges, she would often say, “Go to bed, get a good night’s sleep, tomorrow will be better, and we will deal with whatever comes our way.” They have lived with this advice for the rest of their lives.

She doted on her grandchildren. There were always warm hugs at all times of the day. When you woke in the morning, she would pause from reading her Sukhmani, run her hands over your head, planting a kiss on your cheek, and blessing you with the best the Universe had to offer. Despite getting very less, she always had lots to give. It takes a very magnanimous, larger-than-life person to transcend circumstances, to rise above them, and in the process generate enough selfless love to give others. She proved, through her actions, that unconditional love has the power to overcome fear, hate, anger and other negative emotions.

She wasn’t a nurse by profession, but certainly acted like one when needed. Jaundice had spread in Bombay, and two of her grandchildren suffered from it. Different oil free recipes were churned out by her along with a daily dosage of Liv 52, and gallons of sugarcane juice with ginger. She would run to the sugarcane vendor to get fresh juice daily. She cured her grandchildren much to the surprise of Dr Rajani who shook his head in disbelief. When they had numerous falls while playing, often coming home with a bruised & bloodied knee, she was quick to apply “patti” with cream and antiseptic. In no time, they were up and running again. And then there was always “makhi brandy” when they got a cold.

Later in life, when Jethanand (who then lived in the US with his new family) suffered an acid attack requiring multiple surgeries, he traveled to Bombay to be nursed back to health by Devibai. How she did it no one knows. One can put it down to her innate ability to care for another human, to heal, to put her anger or animosity aside, and to do what was needed of her at the time.

But she was no pushover or doormat. One would be wrong to mistake her compassion for weakness. On the contrary, she embodied tough love and hated whining or complaining. She was determined to overcome, especially when challenged. When told by some people that her kids were not worthy of earning a degree, she made it her life’s mission to make it possible, as if to prove that she was capable of mapping her own destiny. No one was going to dictate what was possible; only she did!

Now for some colourful anecdotes about Devibai as narrated by her grandchildren:

Devibai died in 2007 at the age of 87. During her final months, her grandsons Haresh and Manoj visited her often, taking good care of their dear “Naani”.

Other grandchildren who were overseas also paid their visits. Kiran would travel often during her last three difficult months when she was bedridden. Silently for her, it was payback time for all that her grandmother had done. During Kiran’s last trip, Devibai chided her not to come back again as there would be no need. She passed away the next morning.

Around the same time, Amrit was in Bombay to see her, and the night he was scheduled to fly back to Canada, he stopped by to see her for one last time. As Amrit kissed her goodbye and left the room, her face suddenly turned very sad. They both knew this was the last time they would see each other. Amrit walked to the main door and spontaneously decided to turn around to see her one more time. This time, in a final gesture that embodied the very essence of who she was, Devibai mustered a wonderful smile, her face glowing with joy. It was her last courageous act in the midst of adversity. A sign perhaps that her life’s work was not in vain; that in the end she had indeed won. It lives as a lasting memory to this day.

We hope she is dancing in the heavens, watching over her children, grandchildren and great grandchildren. Witnessing what her life’s work has produced. It is our sincere hope that by narrating her story, it will be told and retold by future generations at Diwali and Thanksgiving get togethers around the world. Devibai’s future generations will know that they come from grit, from compassion, from love, from a “can do “spirit, and above all, from her.

She will live on through these stories, and in the form of the Devibai Mehta Scholarship – an effort to celebrate her life and her spirit!

About the Authors / Credits:

This narrative about Devibai Mehta’s life is an act of love! It is jointly authored by two of her grandchildren, Kiran Mehta Luthra and Amrit Kishore Mehta. The president of Bhagnari Panchayat, Shri Lachu Gehi (also Devibai’s brother) provided plenty of rich anecdotes that deepened our understanding of her life, her challenges and her triumphs. Finally, the words expressed here reflect the sentiments of all of Devibai’s grandchildren – Haresh Gulabani, Manoj Gulabani, Reshma Mansukhani, Pooja Mehta Chandani, Rahul Mehta, Rajiv Mehta, Shalini Mehta, Sheetal Mehta Brown. We are blessed to be part of her lineage!

About the Devibai Mehta scholarship:

As a celebration of Devibai’s life and spirit, the scholarship will selectively fund deserving students in need of a good education and unable to afford one.

We are looking for individuals who embody and embrace her enduring values:

1. The virtue of WORK – work hard, be sincere and never shy away from a tough challenge.

2. The enduring ethos of HONESTY – above all be honest, even when circumstances force you to do otherwise. Tough times pass. Don’t compromise on your ethics or stray from embracing what’s right.

3. The COURAGE to continue – life has its ups and downs, and everyone faces challenges, of varying degrees. Let your most difficult moments define who you are. When you fall down, stand up, dust yourself off, and start over. Success is not final, failure is not fatal, it’s the courage to continue that counts. 4. The value of EDUCATION – study hard, and embark on a lifelong quest to learn and grow through a formal education.