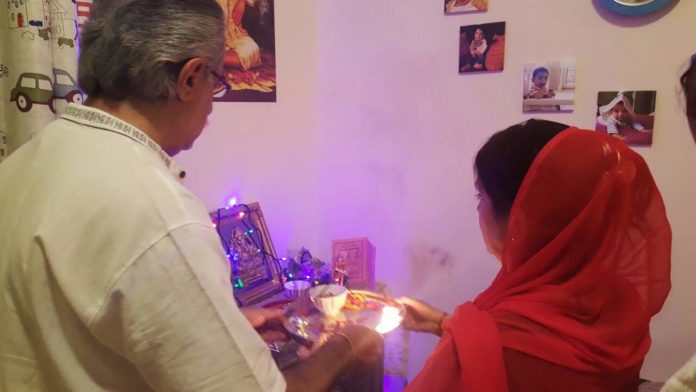 Have you ever wondered why different practices are followed by community members of different surnames (nukh), eg in Jhams a son’s Jhand is done 2.5 years after he is born. Gehi families do it on the second Dussehra. Nastas do it without informing anyone – luka kaney. The rest of the community does it on the first or the second Dussehra. In Nastas actually no one from the family takes the son for Jhand. They give him to an outsider – earlier this lady used to be someone called Lali. Upon return from Jhand, symbolic stones were pelted on her to pacify the crying child. A month before the regular Jhand, Mehtas do a symbolic Jhand for Jhulelal near sea, where they put akhaa and distribute prasad. It is done on a Chander day. Wadhares also do jhand on a Chander near the sea but in the 13th month. Sadanis do the jhand for on 1st or 2nd Ramnavmi.

Besides Jhand, there are many more practices which not only vary but are also specific to a nukh. In most cases, we don’t know the reason why these practices are followed or vary within the community. Perhaps our elders can enlighten us.

Here is a collection of some practices and the related tales, narrated by the elder members of the community. Some of the unique practices may be missing from this article. Please feel free to narrate them or correct the ones mentioned in this article.

Well, the most bizzare one is the reason why Talrejas don’t cook kadu at home. Legend has it that once a beggar approached a Talreja lady during yatra and asked for something to eat. She had her child in the lap, who was covered with a cloth. To ward off the beggar she told him that she did not have anything. So, the beggar asked her ‘what is in your lap?’. The lady replied that she had kadu in her lap. Later she regretted her response and from that day onwards, Talrejas don’t cook kadu at home.

Jhams and Nastas don’t keep child’s jhula (cradle) at home. They and Makkars, if they wish to keep one, then it should be given by some other family. Strangely Jhams consider it inauspicious.

Nastas don’t light deeyas during Diwali. Firecrackers are burnt only if they are given by another family. Laxmi puja is also not done at home, not even rangoli. It seems that long time ago, there was a fire in someone’s house, which led to this practice. Elders say that some have tried to challenge this practice, but it has again resulted in fire. So, they keep away from it. Gehis don’t bring hatris home unless they are given by naani.

Mehta’s and several other nukhs observe the practice of making Saee Bhajji during Diwali. The puja is done after dinner، where the family enjoys delicious Khirni.

When a sikeeladha son is born (after a few daughters), Gehis don’t wear new cloths on him for 9 months. Till then he wears only clothes worn by others. In Jhams and many other nukhs for a newborn boy “Chola” or 1st set of clothes is worn on 40th day and for a girl it is worn on 21st day. Thereafter “perey pavaaee” is done in maternal home of the mother with the new born baby.

Jhams don’t buy or sell any assets or have weddings or celebrations during Shravan and Navratras.

A strange practice is observed by Nastas during Thadri. On the previous day after cooking food they go and take bath in someone else’s house. Recently some of them have started bathing in their own house, but without oil and soap.  Kamras don’t take the thada out of their house. If they need to share it with relatives and friends, then they are called home and fed.

During the collection of these practices, a story came up as to why thada food is eaten on Thadri. In Karachi, people used to visit Durga Maata’s temple to offer their prayers and seek blessings. As the temple was half a day’s travel distance from Karachi and no eateries were available on the route, they used to cook their own food and take it along with them. This is how the custom of eating thada food started on the day we worship Durga Maata. With advances in transport although there is no need to cook a day in advance to visit Maata’s temple, the custom persists. Whatever the reason may be, we get to enjoy the yummy food that is cooked for thada.

On Holka day Gehis do not make atta pedas, which are tied with thread and cooked on the cow dung cakes. They only go near the burning pyre to pray, seek blessings and take the prasad. Lalit Jham has narrated an interesting tale about his family – after Holka, his Daddy and Ram chacha used to pour whiskey on the pyre as an offering and later sit there to drink and dine together. It was bonding time. His elder chachi Lachhmi used to have the honour of seeking blessings for everybody, saying muraad poori theevey and later go around in circle and sing ”Puniyaan puniyaan puniyaan, mediyaan sabhaee muraadaan puniyaan…..” Oh boy! Those were the good old days.

Chhodas make gur lolas (they call it boosree) at weddings, one to feed their ancestors and one is distributed as prasad. The story behind this practice is that there was a phase when a close relative would die during the weddings. So, to please their ancestors they offer them sweet lola.

Another practise followed by Chhodas takes place when a son is born in the family. They offer a deg full of sauted onions. This should remain covered till it is immersed in sea. This is their way of thanking the almighty that son has been born to carry forward the vansh. Dudejas put Akkha in the sea when a child is born in a family. A poor widow is made to put the same in the sea

In Mehtas there still the tradition of making chaura chawal on the marriage day when whole family is invited for lunch.

During Ganesh sthapna ceremony most of the community makes Khatti Dal Chawal and Mohan Thaal, but Gehis prefer Gulab Jammun and Malpuras instead of the Mohan Thaal.

As Mehta believe in Jhulelal, they say that making Chaura Chana, Moong Palak and Methi on Fridays brings good luck to the family.

Dudejas don’t buy diamonds from their own money. Someone else has to pay for the purchase and money is reimbursed back to the person.

There are several superstitious surrounding the humble jhaaru and kachra. Many don’t use jhaadu after sunset. Mehtas collect kachra on all 3 days of Diwali and then throw it as they feel it brings good luck and bharkat in their house. Talrejas don’t do jhaadu on the day anyone is travelling.

Mehtas don’t have two family weddings on the same day.

The rains remind me that many observe the practice of bathing the child with some rain water, before he/she is taken out for the first time in rainy season. We hope someone can tell us more about this rasm. Perhaps it is done to improve the immunity against rain water.

Over generations some of these practices have been discontinued, though some are still followed. One way of continuing to interact with our elders would be to inquire about these practices. You will find that they love to talk about them. Keep them engaged during these times.

PS: Several insights have provided by Prakash Gehani in the comment box. Please read these also.