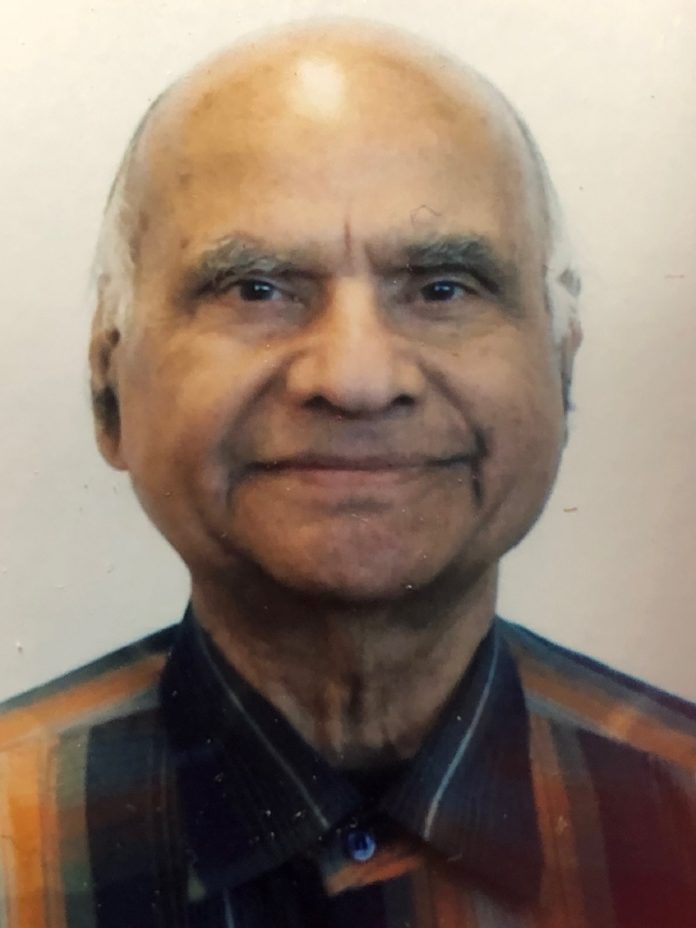 Following obituary of Late Mr Ram Gehani was published in the Washington Post and also posted in Legacy.com. It was compiled by his children.

Ram Gehani, social activist, father, college professor, and successful business owner in the Washington, DC area, passed away at 4 a.m. on March 27, 2020, from complications of cancer. Mr. Gehani lived in the Washington, DC Area for 49 years. Born in what was then called Karachi, India in 1934, Mr. Gehani was raised in poverty during the politically tumultuous time of India’s Partition. In 1948, he fled Karachi with his family as a refugee to Mumbai and spent his childhood days working odd jobs after school to support his family and to finance his education. Mr. Gehani graduated from Bombay University, with BA and MA degrees, and later earned a Ph.D. in History from Strathclyde University in Scotland. Through hard work, determination, and his association with the RSS, a volunteer organization in India, he cultivated a love of knowledge and social service during his younger years which stayed with him throughout his life. Mr. Gehani immigrated to the United States in the late 1960s and settled in the DC area where he worked as a professor and librarian at the University of the District of Columbia for nearly 30 years, retiring in 2000.

Mr. Gehani never forgot his humble beginnings, and he made it his life’s purpose to serve less privileged people. During the 1970s he took a one-year sabbatical from his teaching duties to return to India. During this time, he studied different charitable organizations in India, and eventually co-founded a non-profit organization dedicated to breaking the cycle of poverty by empowering marginalized people with sustainable skills, medical services, education, and infrastructure.

At age 47, Mr. Gehani started his real estate business, which grew to be quite successful and served as the basis for him to donate much of his life savings to charity. Through his hard work in real estate, he donated all his life’s savings, a substantially huge amount to Sewa International, an organization which serves India, USA and many countries. SEWA, International, is a non-profit organization which specializes in family, child, tribal, and refugee welfare around the world. Visit sewausa.org for further details of this organization.

Through his work in service, Mr. Gehani had the opportunity to meet with senior American and Indian leaders, including several Indian Prime Ministers. Mr. Gehani had a calm, composed and wonderful spirit. His family and friends described him as willing to work through any obstacle facing him to fulfill what he believed to be his social mission. He was a true example of simple living, high thinking, and “service above self.”

Outside of work, he was known for his joy of reading and learning, and his disciplined lifestyle including exercising nearly every day, even during his cancer treatments. To his children he demonstrated valuable life lessons and was an excellent listener. He also taught at Sunday School every week and loved arts and culture, particularly the Smithsonian Museums in DC. He strongly believed that travel was the greatest way to experience other cultures first-hand. His smile, wisdom, and generosity will be remembered and missed tremendously by all of his friends and family.

Mr. Gehani is survived by his daughter Dr. Arti Gehani of San Francisco, CA, his son Mahesh and daughter-in-law Sarika Gehani of Dallas, Texas, his three grandchildren, Nithya, Somya, and Karthik Gehani, and his wife Dr. Mohini Gehani who lives in Potomac, Maryland. His funeral was held in a warm ceremony on a lovely day, Monday, March 30, 2020, at the Snowden Funeral Home in Rockville, MD. The family will schedule a public memorial service to be held on a future date due to current restrictions on group gatherings.